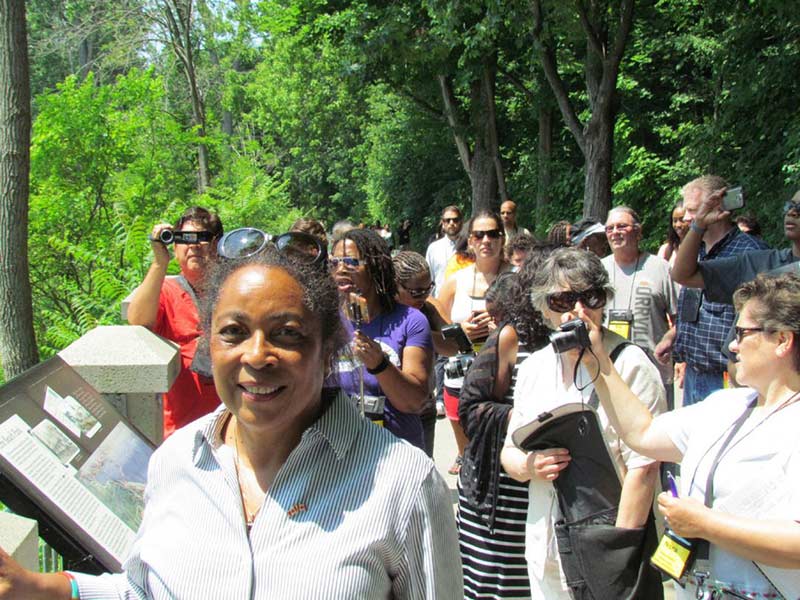 At age 50, Lezlie Harperwondered what to do with the rest of her life. It was 2004 and she was recovering from a car accident, which left her fatigued and unable to work for an employer.

The St. Catharines resident took a business course and decided to pursue her passion — her family’s rich history.

A descendant of U.S. slaves, she formed Niagara Bound Tours in which she tells the incredible story of the Underground Railroad, a clandestine, informal network of crossing points, people and safe houses in Southern Ontario for black slaves in the 19th century to escape their U.S. owners.

Last Saturday, with delight tinged with some sadness, she stood at an old ferry crossing in Fort Erie beside the Niagara River, and recounted a proud chapter of Canadian history to a bus tour of Southern California teachers.

“Right there on that river,” she motioned. “They came across from that land of fear (pre- Civil War U.S.) to freedom on this shore.”

“Here!” she then pointed to the grass. “Here is where Josiah Henson found freedom, where he jumped for joy, where he kissed the ground.”

Harper told how Harriet Beecher Stowe wrote her 1852 novel, Uncle Tom’s Cabin, based partly on Henson. A little further upriver, she explained how the Niagara Movement, forerunner of the NAACP, was born at the Erie Beach Hotel in 1905.

“I’m so proud all of this has happened in my hometown,” she says.

In the 1850s, Harper great, great grandfather, Jack Bright, escaped his Kentucky owners and came to Fort Erie. She’s also traced her roots back to another grandfather, William John Chandler, who was born in London, Ont., and fought for the Union Army in the U.S. Civil War.

Harper has her own examples of racism in Canada. As the only black student in her high school in 1970, she wanted to take a white student to a sorority formal, but the boy’s father wouldn’t allow it. Instead, she wound up going to the formal with the only Chinese student.

“Canada has a wonderful history of accepting minorities, and people are finally recognizing black history, yet black people are often not included in the writing of our history,” she said.

One of the visitors on Saturday’s tour, Ken Morris Jr., a descendant of famous abolitionist Frederick Douglass, was impressed.

“History lives in all of us and Lezlie brings this alive through her stories to educators and young people,” he said. “Her message is inspiring: about overcoming challenge and obstacles — not only for our ancestors but for us. We need to know where we came from in order to keep going forward. Her stories go back with teachers and students to their homes around Canada and the United States.”

After the Civil War, many of the slaves went back to the U.S., but others settled across Southern Ontario.

Harper does about 15 tours annually to Niagara cemeteries, crossing points and churches, and is hoping to expand her business. 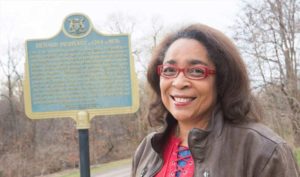 Lezlie Harper will spread her wealth of knowledge about Canadian black history to a high school in New Jersey next month. The Fort Erie native, who for more than a decade has offered customized tours of Niagara’s Freedom Trail, relating the stories of black freedom seekers, was invited to speak to students in Newark in 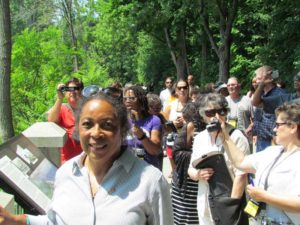 At age 50, Lezlie Harperwondered what to do with the rest of her life. It was 2004 and she was recovering from a car accident, which left her fatigued and unable to work for an employer. The St. Catharines resident took a business course and decided to pursue her passion — her family’s rich history.

Fill out this form to get info on upcoming tours and events and join our email list for even more great updates!